Favorite Cinematic Moments
(Click on the images to watch the scenes.)

La Dolce Vita is a cinematic masterpiece in which Fellini manages to capture every element of male experience in one film – aging, existential longing, picking up chicks. In this scene, Marcello Mastroianni has left a party with Anita Ekberg. She gets him to run through a Roman neighborhood in the middle of the night looking for milk. Yes, she’s that hot and he’s that desperate. Once he finds the milk, he finds Ekberg wading in the Trevi Fountain of Rome where he tries to kiss her, to no avail.

Who knew Humphrey Bogart was a muse for Ramon Ayala’s “Tragos De Amargo Liquor.” Sitting at a bar, reminiscing about the one that got away, insisting that the piano player, “Play our song.” Bogie is so tough we don’t feel sorry for him. His hurt makes him tougher. That’s magic. 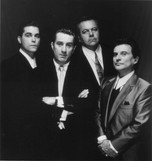 Pure testosterone. What man hasn't had the fantasy of executing the ultimate beat down on some uppity fellow that thought he could mess with your girl? This is quintessential Scorsese - masculinity and a woman's relationship with it. Girls don't fall for a guy over coffee having a deep conversation in a Scorsese picture. For the intellectual nerd, this is the ultimate fantasy.

Robert Dinero plays Neil Bukowski, the ultimate loner criminal devoted to his lifestyle as a thief with a samurai-like code of detachment.  When a cute young woman flirtatiously asks him a question, his response is as scary as only Dinero can deliver, “Lady, why you so interested in what I read or do?” Only once he realizes that she is flirting does he soften up. And this softening up from stone cold criminal to flirty smile in one scene is pure movie heaven.

This is a movie’s movie moment. Two beautiful actors – George Clooney and Julia Roberts – at the top of their game with incredible chemistry. The dialogue is sharp and turns on a dime. Andy Garcia brilliantly helps close the scene.

Guide to Recognizing Your Saints

So many times in life, you have an experience – the perfect date in San Francisco’s North Beach; riding in a train as the sun is rising over Venice, Italy; surfing the perfect wave in Santa Monica – but these moments are often hard to capture in cinema. In Guide to “Recognizing Your Saints,” they manage to capture the moment of discovery when riding a subway in New York.